The Botanical Garden is a green oasis in the city of Oslo – a place to get inspiration and experience beauty. It is an ideal place to relax from the stress of city life, and to enjoy the botanical variety and diversity to be found here.

Most of the area is designed as an Arboretum, with approximately 1800 different plants. The garden holds a large and varied collection of trees and shrubs planted in a systematic fashion after plant family.

The Scent Garden is arranged as an experience for all, but especially the blind, mentally handicapped and wheelchair-bound.

The Palm House from 1868 and The Victoria House from 1876 present exotic plants from other parts of the world. 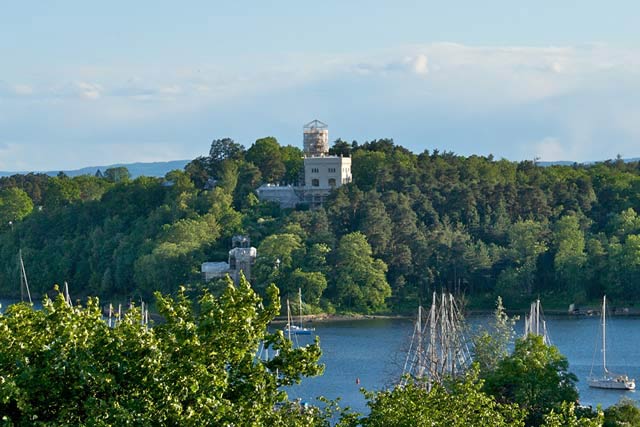 Photo : Kjetil Ree Oscarshall castle and the park are located in the small fjord Frognerkilen on Bygdøy in Oslo. The building is considered one of the main neo-Gothic works in Norway.

In the mid-19th century King Oscar I had the pleasure palace of Oscarshall built on rising ground above the innermost arm of the Oslo Fjord. Since 1863 it has been at the King’s disposal.

Oscarshall is regarded as Norway’s neo-Gothic showpiece and a monument to mid-19th century Norwegian art. Terraces with fountains at different levels lead down to the sea.

Guided tours of Oscarshall (in Norwegian) are held every hour during opening hours. The final tour is at 5 pm. 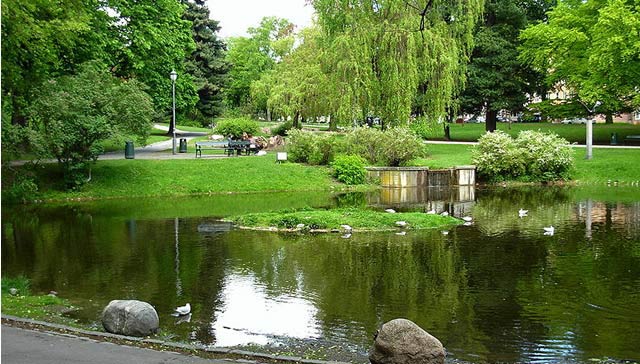 Photo : Helge Høifødt The park was planted by the city in the years 1876-86; it has a pavilion, and a reflecting pool covering a reservoir.

St. Hanshaugen is one of Oslo’s largest parks, just north of the city centre. It is a popular recreational area, great for walks and with a view over the city from the top of the hill.

It was originally a bare rock hill. In the 1840s the name St. Hanshaugen (“midsummer hill”) came into use, as the hill was a popular place for midsummer celebrations. In 1855 it was decided that parts of the hill was to be planted, and a big part of the hill was turned into a park in the next 30 years. The park also got a park keeper house, an artificial creek and a pavilion on the square Festplassen, and the park was expanded. Through the years, a number of statues were also placed in the park. In 1936, the park got an open-air café on Festplassen – the square on top of the hill – which is still a popular summer café today. 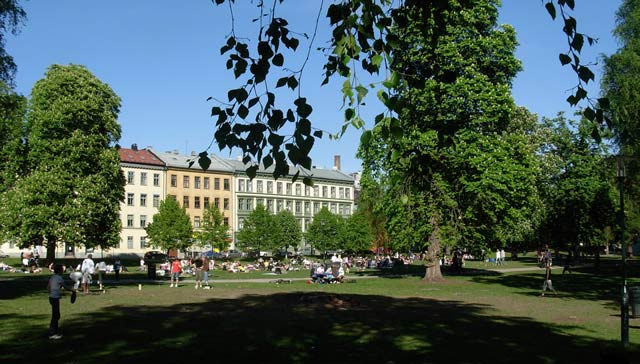 Photo : Helge Høifødt Sofienbergparken is one of the most used parks in Oslo. It hosts 3,000 visitors on a summer day because of its central location

Sofienberg Park is the biggest park in the Grünerløkka area, and a much used recreational area for the locals, especially the younger generations. The park has table tennis tables and a fun playground for the kids. In the middle of the park lies Sofienberg church.

The park was originally a cemetery, inaugurated in 1858, but many people were critical to having a cemetery in a central and densely populated area. It was decided to gradually dismantle the cemetery and make a park, and in 1972 the construction of the whole park was completed.

On the north side of the church, there is still a small, fenced graveyard for the Mosaic Religious Community. 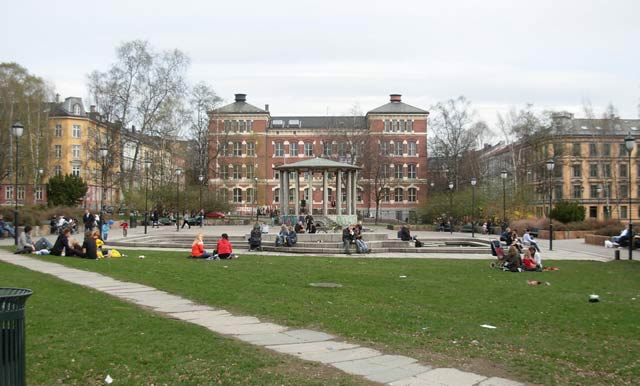 Photo : Helge Høifødt Birkelunden (lit. ’The Birch Grove’) is a park placed centrally in the Grünerløkka borough of Oslo, Norway. It is formed as a rectangle like a city block.

Birkelunden park in Grünerløkka is one of the most used parks in Oslo. The park was laid out in the 1860s, and is located in the upper part of Grünerløkka between Paulus church and Grünerløkka school.

On Sundays all year round, there is a bric-a-brac market in Birkelunden. The park has a music pavilion from 1926, and is often used for concerts, rallies and festivals. There is also a small park pool, from 1928.

The blocks around Birkelunden mainly consist of 3- and 4-storey apartment buildings from the 1870s and 1880s. This area is intact with same-style buildings from the same period, and it was therefore decided (by the King in Council on 28. April 2006) to protect it. The area that is protected consists of 15 blocks with 139 apartment buildings, the Paulus church the Grünerløkka school and Birkelunden park.