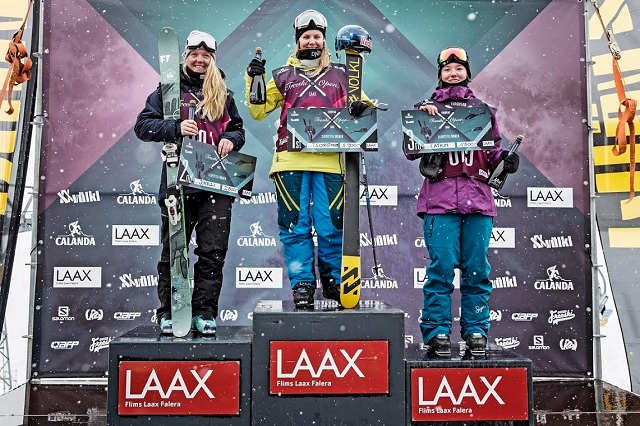 As today’s EFO champions also all 130 participants of this year’s competition were wowed by the slopestyle course, which was built by the Snowpark LAAX crew up on Crap Sogn Gion mountain: an unique design in the contest circuit, packed with surprises and a perfect playground for new trick combinations. The set-up started with two jibb features offering the riders various possibilities for moves on rails, bonk and tube. This section was followed by the highlight of the 2015 edition, a four jump kicker-line.

In the women’s field, it was a battle for the victory between the strong Norwegian girls Tiril Sjåstad Christiansen and Johanne Killi, EFO champion 2014. Finally it was Tiril winning her first EFO title. She set the high score of 87.16 points on her second run with a front 450 of, followed by a front 270 of, starting the kickers with a switch left 540 safety to a right 720 leading tail and a left 540 mute ending with a switch right 720 leading tail. Second place got to Johanne (86.50), Isabel Atkins (UK, 79.16) ranked 3rd.