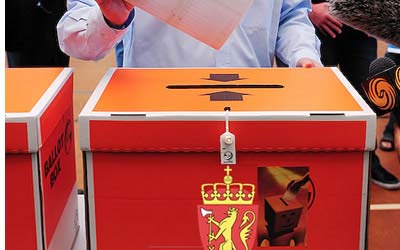 According to the election poll conducted by Norstat for the conservative newspaper, Vårtland, Labor Party has lost 1 percentage point of its votes to 26.9 percent. Conservatives (Høyre), on the other hand, consolidates its position as the largest party with the support of 31.6 percent of respondents.

Another right wing party, Progress (FrP) also takes the third place with an increase of 0.1 percentage points to 18.9 percent.

While the largest government party falls, the Socialist Left Party (SV) increases its votes by 1.3 percentage points to 5.2 percent. The third member of the coalition, Center Party (Sp) loses 0.6 percentage points in the poll and falls below the threshold of 3.8 percent.

If the poll was election results, the government parties Ap, Sp and SV would receive a total of 58 seats in the parliement. Conservatives and the Progress Party would have 87 representatives in total.