Stoltenberg discussed energy and the economy with Merkel 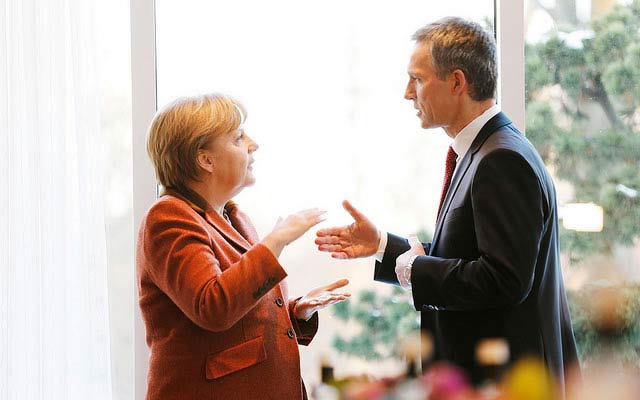 “In these difficult times, when the economic crisis is putting pressure on all European countries, our friendship and cooperation with Germany is important for Norway,” Prime Minister Jens Stoltenberg commented.

There are indications that the economic situation in Europe and in the eurozone is gradually stabilising. The European financial markets now appear to be far more stable and there is less uncertainty, thanks to the determined efforts of many European leaders. But economic growth in many countries is still too weak to bring about a reduction in unemployment.

“It is vital that Germany plays an active role in Europe in the time ahead. Although a great deal has been achieved and important plans for ensuring growth have been made, Europe’s leaders must continue their crucial work in this area. This is essential for young people in Europe, and it is also essential for Norway,” Mr Stoltenberg said.

Energy is one of the mainstays of cooperation between Norway and Germany. Germany’s energy needs are substantial, following its phasing out of nuclear power, in line with theEnergiewende energy transformation plan. Norwegian gas is important in this context, but Norwegian renewable energy can also play a major role in meeting the needs of the German energy market.

Later today, the Prime Minister is hosting a working dinner on the topic of energy, together with Minister of Petroleum and Energy Ola Borten Moe. German and Norwegian energy companies (RWE Dea, Voith, Wintershall, VNG, Statoil, Statnett, Hydro and Statkraft) will meet Ms Merkel and Mr Stoltenberg for a discussion on energy cooperation, the challenges we face today, and how cooperation between Norway and Germany could develop in the future.

Norway and Germany are engaged in close dialogue on a number of foreign policy matters, and hold common positions on many issues. In their talks today, Ms Merkel and Mr Stoltenberg discussed the terrorist attack in In Amenas and developments in the Sahel and Maghreb regions. Norway and Germany agree that broad-based efforts in areas such as security, good governance and aid are needed if a solution to these challenges is to be found.

The grave situation in Syria, the tensions in Egypt and negotiations on Iran’s nuclear weapons programme were also discussed.

“We also talked about the High North and the Arctic, and the opportunities that exist in the north, in terms of energy and other resources. I said that it was important that more actors with a constructive agenda participate in developing this key region. This includes Germany and the German business sector, indeed the whole of Europe,” Mr Stoltenberg said.

Norway Works on Extradition of Norwegian Citizen from Russia

Norway’s foreign ministry is working to get Norwegian citizen, Frode Berg who is held in a prison in Moscow with accusation of...
Read more
- Advertisment -
Advertisement