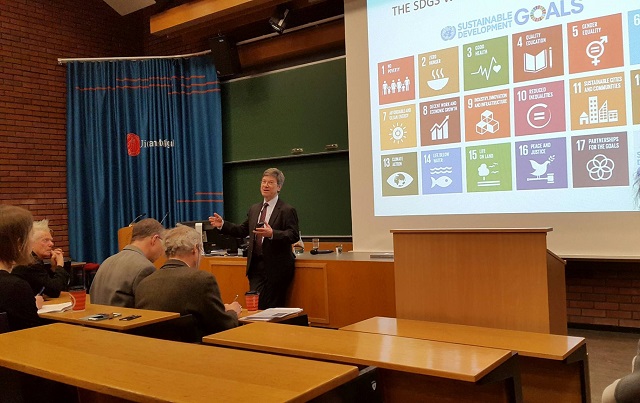 Jeffrey Sachs, the Ban Ki-Moon’s adviser and the director of the Earth Institute at Columbia University, has hold the speech on the new UN’s Sustainable Development Goals in the Social Science faculty of the University of Oslo. He admited that Norway has done a great job on moving towards the achievement of these goals and, together with Sweden, Denmark and Finland is closer than any other country to their fulfillment. However, the situation in other parts of the world is far from idyllic.

One of the main reasons, mentioned by the professor, is dysfunctional politics in many countries today. The global governance faces great difficulties everywhere. Nowadays the world mostly focuses on these issues: the migrant crisis, new diseases and the climate change. Sachs means, the main challenge for sustainable development goals is to manage to combine technology and the wealth in order to make the world safe and fair.

The 17 sustainable development goals were announced in September 2015, which include the following 3 dimensions: economic objective, social inclusion and climate issues. Pervious Millennium Development Goals, introduced by Kofi Annan, were targeting poverty, hunger and disease. A lot has been done already, but there is even more work left to do.

Jeffrey Sachs’ solutions to the global world problems are: the taxation and the tight collaboration between those who know what to do and those who actually can do, namely science and business (bring together health ministers and finance ministers!). The huge disconnect between knowledge and practice is the reason why so little has been achieved so far.

The professor means the world possess more than enough resources to fight powerty, diseases and inequality. The problem has political, psychological and even moral dimension. It is just a question of choice. The only thing the governments need to do is, at least, to cut the military spending. It can save billions of dollars and help millions of people all over the world. But this is, unfortunately, not a new idea.

However, we can not simply close our eyes to the fact that it is all in our hands. To help people all over the world is not just nice words, it is the most important investment we can make in the future of the mankind:

–        If a child does not have an education in the 21st century, this child is lost for a lifetime, adds Suchs.