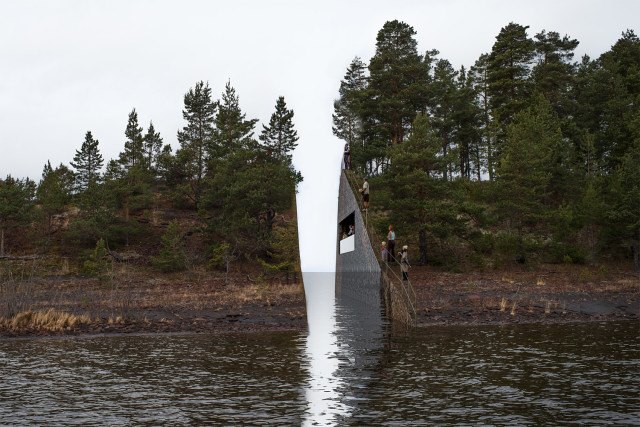 The winning design created by Swedish artist Jonas Dahlberg appealed a lot of attraction in both Norway and the world. His extra ordinary design sees a 3.5 m wide excavation running from one side of the headland at the Sørbråten site to the other, and extending below the waterline. It appears as though the landscape simply stops and then restarts. The mountainside accommodate overlooking porch and have straight, smooth cut surfaces with the deceased’s name engraved. But this is not possible to implement in rock masses in the area, according to geologist Foss Amundsen.

– The rocks are fractured and porous. They are very poorly suited for that kind of operation. To create this monument is like cutting a bunch of fractured, soft pebbles. The monument might crumble at once, says he to NRK.

According to the building plan, digging of the area will start after Easter and the memorial will be completed until 22 July 2015. The Public Agency for Public Art (Koro) is responsible for the design of memorial locations in the government quarter and the Sørbråten at Utøya.

In response to Amundsen’s statements, Koro director Svein Bjørkås says field research was done on Sørbråten and there are alternative solutions.

– We are aware that there are varying rock quality in the area, but it is too early to say something and that is the artist’s cause. He now works in cooperation with contractors who do the technical aspects of the work, says Bjørkås.

But the reaction is not limited with technical considerations. Several neighbors on Sørbråten do not want the planned memorial in their neighborhoods, writes NTB. Some residents call the winning proposal a “rape of nature” and a “retraumatisation of those who were innocent witnesses to the 22 July tragedy”. They have already created a Facebook group” No to the memorial on Sørbråten (Nei til minnesmerke på Sørbråten i Hole)”

Talking to VG, Jørn Øverby is one of the neighbors in the area. He has been honored for having saved some of the young people during the terrorist attack on 22 July. He lives about 100 meters away from the place where the memorial will be built and he fears that this place will become a major tourist attraction.

– We do not want to see such a powerful monument every day, says Øverby to VG.