A Year of Success and Tragedy: What Happened in Norway in 2013?

The New Year did
not start in its best manner for Norwegians. On 16th of January, a
group of militants from Mali attacked and occupied a natural gas
complex partly operated by Norwegian energy giant Statoil in southern
Algeria. The attack came just in the aftermath of France’s military
involvement in Mali. After the attack, Norway announced they might
send troops to Mali contribute to the EU by joining the French-led
intervention force. But the formal decision about a military
contribution to Mali was not taken.

Photo: Bradley Gordon | Abortion Act
in Norway gives all women the right to abortion, while providing
healthcare professionals the right to refuse to practice abortion.

After one week
from this brutal terrorist attack, Norway started to discuss the
unending abortion issue, which was triggered with Health Ministry’s
survey. For the first time in 18 years, health authorities made a
nationwide survey on how many doctors, nurses and midwives would
perform or assist in an abortion. It showed that 186 employees used
the so-called right of reservation. In an hospital in Sørlandet, 37
employees opted out from abortion practices. As a result, the
hospital could only perform abortions once a week.

The root of the
discussion dates back to Abortion Act of 1975, which gives all women
the right to abortion, while providing healthcare professionals the
right to refuse to perform or assist in the procedure for reasons of
conscience. But the reservation clause applies only to doctors who
perform surgery, and not primary care physicians. While approaching
to the end of the year, the debate has been heated with the new
government’s proposal to expand the scope of the Abortion Act by
granting primary care physicians the same reservation right.

Begging: To
Ban or Not to Ban

Photo: Kevin Hoogheem | Ban on begging
has been a hot topic for last two years inboth Oslo and other major
Norwegian cities

In 2013, there
was much in the news about what to do with the ‘beggars’ being
seen in ever increasing numbers throughout Norway. One of the most
unheard suggestions on limiting the influx of beggars in the
discussion came from the deputy Mayor of Oslo, Libe Solberg
Rieber-Mohn. Labor Party politician offered to make mandatory
reporting for the beggars instead of a complete ban.

But the number of
the people who advocates ban on begging has dramatically increased in
parallel with the abrupt visibility of the beggars in almost all
major Norwegian cities.

The surveys
showed that 76 percent of the Progress Party voters and 72 percent of
Conservative voters supported the idea of banning. These figures
encouraged the politicians and in October all major parties in Oslo
agreed on voting for the proposal of a total ban on begging in Oslo
even if Liberals (Venstre) and the Christian Democratic Party kept
their oppositional stance.

In this year,
Norway has kept to be at the forefront in the fight for gender
equality. After long discussions for several years, Norway’s
parliament has voted overwhelmingly to conscript women into its armed
forces, becoming the first European and first Nato country to make
military service compulsory for both genders. The decision taken in
mid-June extended the military service definition for women who
already serve in the military, but do so of their own volition. 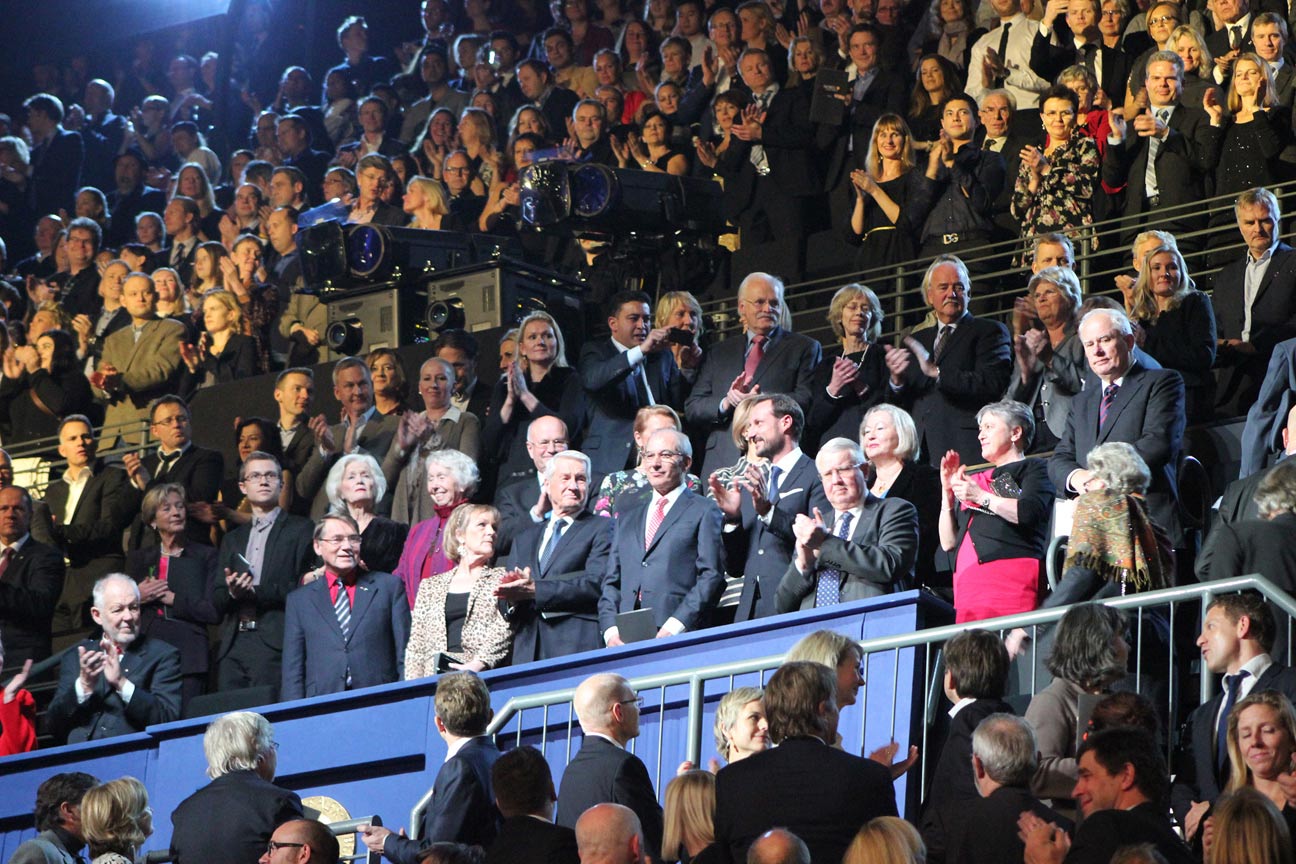 As usual, a
record number of applications for the next Nobel Peace Prize was
filed this year. 259 candidates competed for the Nobel Peace Prize
for 2013. Then in November, the prize was awarded to Organization for
the Prohibition of Chemical Weapons “for its extensive efforts
to eliminate chemical weapons”.

The award was a
symbolic manifestation of Norway to Syrian war and anti-chemical
weapon campaign. As a result of this commitment, UN, US and Russian
officials have approached Norway for help in dismantling Syria’s
chemical weapons. Norway was asked to receive between 300 and 500
tons sarin, and up to 50 tons of mustard gas in Syria.

After a
comprehensive assessment, the countries came to the joint
understanding that due to time constraints and external factors, such
as capacities, regulatory requirements, Norway is not the most
suitable location for the destruction of Syrian chemical warfare
agents.

However, Norway
promised to consider how to support the weapons destruction process,
by contributing personnel, technical expertise, information or
equipment, or providing financial or other resources and assistance,
in coordination with the OPCW, the UN, and its close partners.

The sour relation
between China and Norway has continued since Nobel Peace prize was
awarded to the Chinese dissident, Liu Xiabo in 2010. But in 2013, the
tension between the two countries carried to a new area, cyber space.

According to
Ofigsbo, at least 20 of these serious cyber-attacks could be traced
back to China. It was also noted that particularly high-tech firms,
defense and oil and gas industries were the most severely affected
ones by the attacks. Some in the energy sector were attacked. The
U.S. report, designated “Unit 61398” also showed the
Chinese military as responsible for an attack aimed at a larger
company on Norwegian soil.

In 2012, Norway
has kept its title as one of the most livable countries in the
planet. The Economist Intelligence Unit (EIU), a sister company of
The Economist, reported Norway is the world’s third best place to be
born in terms of quality of life based on surveys of the population
covering 11 factors including wealth, crime, family life, trust in
government and the stability of the economy.

In another
survey, The 2013 Global Peace Index (GPI), Norway was ranked 11th
above Ireland. Moreover, it ranked first in overall Prosperity,
confirming its place as the most prosperous country in the world for
the fifth consecutive year. The country also ranked first in the
Economy and Social Capital sub-indices in 2013.

However, the good
statistics were disrupted with the recent PISA results showing the
educational achievements in reading, mathematics and science among
Norwegian students. Norway’s mean performance in mathematics
declined since the previous PISA assessment in 2009. Norway was left
behind Denmark and Finland in the survey with the worst performance
in math and science since 2009.

Photo: Surian Soosay | 22 July terrorist Breivik kept his topicality in the first half of 2013

Since the
terrorist attacks by Anders Behring Breivik on 22 July 2011, Breivik
has kept his topicality in the media. In 2013,

22 July terrorist
attracted attention of the public with his application to take
political science courses at the University of Oslo. However his
admission was declined since he did not meet the requirements for
higher education.

Afterward, he
applied to Brønnøysundregistrene (Norwegian Entity Registry) for
establishing a Norwegian fascist party. He explained his aim as
achieving “democratic fascist seizure of power” in Norway.
After he was sentenced to 21 years in custody last year, he sent a
letter to several agencies, including the management of Correctional
Services. In addition, he cultivated contacts with like-minded from
the cell.

Photo : Daquella manera  | Norway was affected by both NSA surveillance scandal and the Swedish authorities’ monitoring the Norwegian mobile traffic

One of the
milestones of 2013 all over the world was the former CIA employee
Edward Snowden’s revelation of U.S. intelligence’s surveillance on
foreign citizens’ e-mail and Internet traffic for years. The
scandal made an impact almost in all countries including Norway.

A Snowden
document showed that NSA monitored around 33 million mobile calls in
Norway in one month. Opposition parties reacted strongly and called
the Prime Minister Solberg to protest against the USA. Former Prime
Minister Jens Stoltenberg said he did not know the extent of the U.S.
surveillance.

But Norway’s
frustration over surveillance doubled with the claims that Swedish
authorities monitor the Norwegian mobile traffic. Sweden decided in
2008 that Försvarets (Defense) radio institution (FRA) has full
access to most of the Norwegians communication content that pass the
border. Most of the Norwegian telephone and data traffic between
Norway and abroad goes through Sweden.

The
tragedy in Algeria and the influx of some Norwegian youth into Syria
for fighting against Assad regime coupled with the increasing
right-wing extremism made counter-terrorism action one of the high
priorities of Norway in 2013. In May, the previous government
proposed several amendments in terror law. The suggested regulation
was aiming to make punishable all kinds of preparations, training,
and actively participation in terrorist organizations.

The
most important change in the legislation was making punishable the
suspects in preparation. Accordingly, anyone who receives instruction
in methods and techniques to carry out terrorist acts was to be
punished. Then the proposal was rejected by the parliament. However,
the new justice minister Anundsen signaled that they would introduce
several of the suggestions in the rejected proposal again for
discussion.

A Historical
Election and Centenary of Women’s Suffrage

Undisputedly,
parliamentary election was the most important occurrence of 2013. In
the elections, Conservative party and former prime minister’s Labor
Party competed for leading the coalition. According to the official
results, Labor Party came first but they lost 5 percent point and 10
seats compared to the previous elections. Also their other coalition
members had difficulties to reach the same vote level. One of the
coalition members, SV barely reached election threshold.

As a result,
Conservative Party (Høyre) and Progress Party (FrP) formed the new
government. Frp managed to take part in the government for the first
time in its 40 year history. Liberal Party (Venstre) and the
Christian Democratic Party (KrF) decided to support the coalition
from outside in return to Christian Democrats and the Liberals’
demands for protecting asylum children rights and giving up oil
drilling plans in Lofoten and Vesterålen.

2013 election’s
peculiarity was not limited to the changing political landscape.
Norway, at the same time, celebrated the 100th anniversary of a true
democracy, as the first independent country in the world to introduce
universal suffrage for women.

On 11 June 2013
it was 100 years since Norwegian women gained the right to vote and
Norway became a true democracy. Norway was the first independent
country in the world to introduce universal suffrage, with women and
men enjoying equal democratic rights. The Government celebrated this
centenary locally, nationally and internationally.

What did the
fox say?

Photo: P3 | In 2013,
Norwegian comedian twins Ylvis did not only shake Norway but also
reached a worldwide reputation with their epic music video, “What
does the Fox Say?”

Another memorable
topic of 2013 was the Norwegian
comedian duo Ylvis’ new program music clip, What does the fox Say.
The video broke record by reaching more than 200 million views in a
short time. While the song and the dance figures in the video clip
turned into an epic trend all over the world, international media
competed each other to host two Norwegian comedians.