More Norwegians consider themselves to be of Sámi heritage 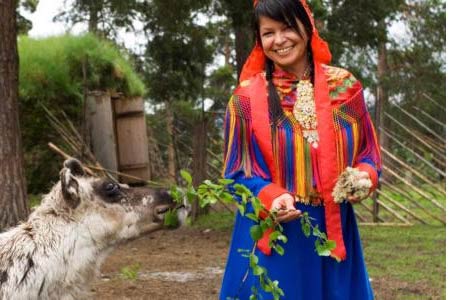 Source: norway.orgTwenty years after the Samediggi (the Sámi parliament) was established, the number of individuals registered as part of the Sámi population has risen from 5 500 to almost 14 000.

King Olav V opened the first Samediggi in Karasjok on 9 October 1989. Since then, elections to the Sámi parliament have been held every four years concurrent with the Norwegian national elections to the Storting.

The Samediggi serves the Norwegian authorities in an advisory capacity, and its sphere of responsibility is any matter that in the view of the parliament particularly affects the Sámi people.

A special electoral register of the Sámi people was established for use in the Samediggi elections.

It is estimated that 40 000 to 65 000 Sámi live in Norway, although the exact number is not known. In the past 20 years, however, a growing number of Norwegians of Sámi heritage have chosen to register themselves as Sámi in the electoral register.

Prior to this year’s election there were 13 890 Sámi listed in the Sámi electoral register, ten per cent more than the last election. This increase was particularly noticeable in the Sámi constituency of South Norway (Lulli-Norga), which showed a 30 per cent rise in the number of registered voters.

The activities of the Samediggi

The purpose of the Samediggi is to work for the recognition of the fundamental rights of the Sámi people. The Samediggi seeks to safeguard and strengthen Sámi culture, language and community life, as well as to ensure the continuation of various Sámi traditions.

AS Sivilarkitekter MNAL“We have seen a number of tangible results. For example, all Sámi children have gained the right both to study and be taught in the Sámi language,” says Ole-Henrik Magga. He also stresses the importance of the Finnmark Act, which was passed in 2005 thanks to the Samediggi’s efforts.

The Finnmark Act gives land and water rights to the Sámi people and other residents of Finnmark County. An area larger than Denmark was transferred from state to local ownership.

“This is a significant event, on a global scale as well,” says the former Samediggi president.

Advisers to other indigenous groups

In conjunction with other Sámi institutions, the Samediggi works to strengthen the rights of other indigenous peoples. Norwegian Sámi have often voiced the demands and desires of other indigenous groups, and members of the Sámi population could be found on all sides of the table when ILO Convention 160 concerning Indigenous and Tribal Peoples in Independent Countries was adopted in 1989.

“There is a clear connection between the Samediggi and the role played by the Sámi people in the international arena. Some of these efforts were launched prior to the establishment of the Samediggi, but it is the same individuals who are involved. We can be proud of the work carried out by the Sámi people in Norway. They are both role models and advisers for other indigenous groups in their struggle to secure their rights,” Ole-Henrik Magga believes.

Not a solution, but a beginning

According to Ole-Henrik Magga, the Samediggi is not the solution, either for the Sámi or other indigenous groups; rather, it represents a chance to begin to work in new ways.

“The Samediggi is an established tool for interacting with the ministries and the Government. Although it is not the only way for indigenous people to organise themselves, many have looked to the Samediggi model and the concept behind it. The model works best for those who live integrated demographically among a majority population,” he emphasises.