Review: Turbulent and Mighty Continent. What Future for Europe? 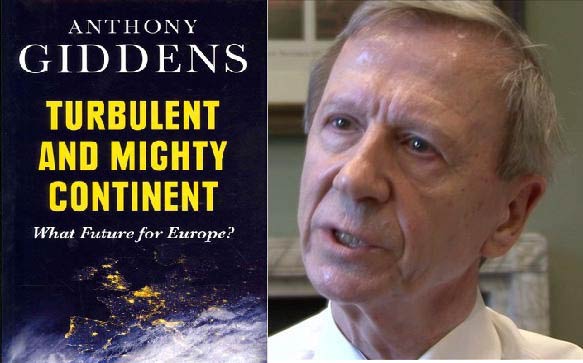 Anthony Giddens is former Director of
the London School of Economics, Life Fellow of King’s College, Cambridge, and
Member of the UK House of Lords.  He is
also a proponent of Europe and globalisation.
In Turbulent and Mighty Continent
he presents his case for a united Europe and envisions what a future Europe might
look like.

Starting with Winston Churchill’s unfulfilled
1946 vision of a ‘United States of Europe’, Giddens moves forwards 60 years to
a continent facing a buoyant future.  A
few years on and Europe, with its 500 million inhabitants, is coming to terms
with the repercussions of the greatest crisis in its history.  Europe faces some serious and dangerous
problems, says Giddens, and he sets out to identify them and propose a way
forward.  He laments the fundamental lack
of trust in the EU.  There is no sense of
belonging, he says, no emotional roots that bring its inhabitants
together.  Democracy and effective
leadership are lacking; the larger countries dominate the EU and individual
citizens cannot relate to it; and EU energy and foreign
policies are too concentrated in the hands of member states.  Giddens
advocates a federalist solution and increased social investment and, while in
his opinion the single currency should be retained, saving the Euro should by
no means be seen as the dominant factor affecting Europe’s recovery.  Giddens acknowledges, albeit fleetingly, that
the task ahead is daunting, but urges a “far-reaching rethink of the European project
as a whole”.  In the six chapters that
follow he examines a range of topics: the EU’s identity; its economic
situation; social policy; integration; and climate change and energy,
concluding with a frank look at the relevance of Europe today and its future
prospects.

In treating the EU as a ‘community of
fate’ Giddens advocates banking union, federalism and
mutuality, and considers the idea of a European president – an idea that is 10
years away, in his view.  Encouraging
positive arguments by both Eurosceptics and pro-Europeans, he poses some
interesting questions: who is actually in charge in Europe?  What can the EU do to improve its brand
recognition?  Should English become the
official EU language?  Giddens also considers
whether Britain should leave the EU.  He imagines
a model not unlike Canada’s, whereby the UK would have less influence but fewer
enemies.  It would as a consequence need
to become more competitive and deal more with emerging economies – a ‘not
unattractive’ vision.

How, then, to
move forward?  A Marshall Plan-type economic
recovery initiative is not an option, and Giddens suggests instead a range of
measures, such as complementing austerity with investment, correcting
inequalities, creating net new jobs and seeking free- trade agreements outside
Europe.  Reform of institutions outside
the economy would be integral, as would be immigration policy.  Giddens points out that significant progress
is now being made in countries worst hit by the economic crisis, and describes Greek
economic recovery as the finger in the dyke of the Eurozone.  He outlines strategies for growth – smart,
sustainable and inclusive – and discusses the roles of SMEs, digital technology
and the single digital market.  He is a
keen advocate of ‘bringing back the jobs’ from outside Europe, and ‘bringing
back the money’ from tax havens.

The European
social model – more accurately a series of individual models – is seen as being
in serious jeopardy.  Giddens challenges
whether reducing expenditure on social programmes is compatible with beneficial
reform.  A proposed ‘social investment model’
would shift from negative to positive welfare and focus on preventive measures.  Instead of dealing with the effects of social
problems, he says, more should be done to address the causes, and create social
conditions whereby the safety net of welfare is a last resort.  Reforms in education, hospitals and even
prisons would also contribute, as would ’flexicurity’, i.e. increased job
security through workforce flexibility.
Perhaps not surprisingly, Giddens cites Nordic social systems as some of
the more successful in Europe.  On the
issue of immigration, Giddens advocates a balanced Europe-wide approach.  He claims we are entering an era of ‘super-diversity’,
which will bring economic benefits if embraced.
He discusses multiculturalism versus ‘interculturalism’, where the focus
is on processes of negotiation and dialogue that can positively reconstruct
public space and renegotiate shared identities.

Giddens acknowledges
Europe’s progress in reducing global warming, but thinks a restructuring of EU
climate policy is necessary, one that balances opportunity and risk.  He touches on green policies, sustainability
and GM crops, and considers the energy ‘trilemma’: emissions, economic
prosperity and resource security.  He admits
to being a reluctant supporter of nuclear energy, considering coal to be far
more dangerous.  The pros and cons of the
shale gas revolution also get a mention, as does the necessity for carbon
capture and storage.

In the final
chapter Giddens explores Europe’s identity.
He discusses the problem of ‘finitude’, or where the EU’s eastern
boundaries should lie, and considers Turkey’s 50-year struggle for accession.  He sees Europe as turning from a position of power
to one of peace and prosperity while the US moves in the opposite direction,
creating a potentially irreversible gulf as a result.  In his view the post-Cold War bipolar period
has led to inadequacies in Europe’s defences, with a lack of a coherent military
force, volatile situations on Europe’s flanks and new security threats
emerging.  A European army would make
European defence effective, and a flexible, creative and innovative pan-European
security strategy is a necessity.

Despite a rather
disappointing conclusion focusing almost entirely on the possible breakup of
the single currency, Giddens presents quite a convincing case for a federal
Europe, along with some well reasoned proposals for turning it into a reality.  It is a pity, though, that his otherwise positive
and proactive approach is tempered by a call to wait and see what develops in
Brussels before taking action.

Turbulent and Mighty Continent What Future for Europe?

Published in 2014 by Polity Press