A Theatrical Travel from Romania to Norway 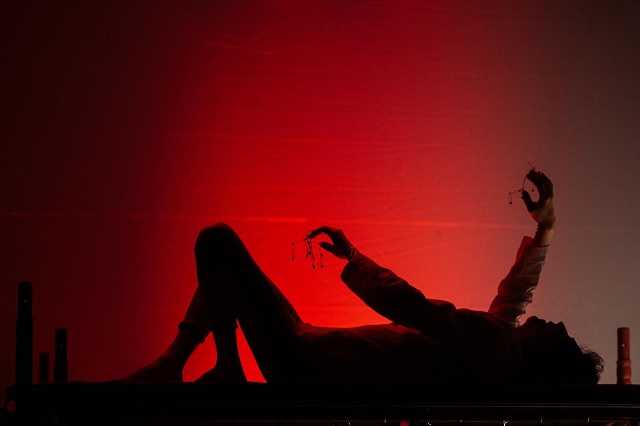 The plays were written & directed by Radu Popescu, Apropo´s artistic leader and director of the Bucharest Fringe Festival:
“I think that the search is the most important thing in theatre,” says Radu Popescu, artistic director of Apropo Theater from Bucharest.  “It´s what keeps you alive.”
This quest brings this independent theater group to Oslo for the first time later this month, with two original theater performances: A Trip to Urmuz, described as a “surrealistic adventure”; and The Will, a psychological drama.
Performances will take place Mon-Weds, 10-12 October (Urmuz) and Fri-Sat, 14-15 October (The Will) at Grusomhetens Teater at Hausmannsgate 34 in Oslo.  Apropo´s  tour to Norway is made possible through funding from EEA Grants, the Romanian Government, and the Romanian Cultural Institute.
“As a `first contact` abroad it is very important for us to get feed-back on our work because we come from a different culture,” explains Popescu.  “We would like to talk to our audience after the shows in order to get as many impressions as we can.”
The two performances by Apropo is an example in contrasts.  The Will, which premiered in 2015, is “very text-centered, psychological,” says Popescu.  “The play is very specific for the Romanian cultural space, which is predominantly Christian Orthodox.”  A Trip to Urmuz, which premiered just last month in Bucharest, is more visual and poetic.

“I made a story on a fairy-tale structure which combines different texts from many surrealist and avant-garde writers from the beginning of 20th Century,” says the director, who also wrote both productions.  “The Bizarre Tales of Urmuz are only the inspiration for the characters.  The dialogues are made from poems and other writings by Tristan Tzara, Eugene Ionesco, and others.”

Mr. Popescu is also the founder and artistic director of the Bucharest Fringe.  He learned of the opportunity of coming to Oslo earlier this year after coming into contact with Brendan McCall, Producer for Grusomhetens Teater.

“I am looking forward to seeing Popescu´s work with Apropo this month,” says McCall.  “It is a rare opportunity for our Norwegian audiences to experience fresh, independent theater from Bucharest.  These two plays will be a stimulating window into some of Romania´s contemporary theater language.”

Founded in 2010, Apropo Theater is not only interested in staging the plays of its artistic director.  “We are also interested in exploring physical and experimental working methods, such as Viewpoints and improvisation,” says Popescu.

Apropo Theater hopes that the audiences in Oslo will be interested in the cultural differences. “The problems within a play like The Will may look awkward to a modern, non-religious culture like Norway,” says the director, “but in Romania we still find it hard to deal with.  Yet I also think that themes as depression, loss of someone dear and the relation with the Divine are universal.”

All Performances at Grusomhetens Teater: